So, from this article you will be able to know where brake is in the car, whether in an Automatic car or in a Manual car.

It has two pedals only; the brake pedal is located on the floor of the car. On the floor there are two pedals, the first pedal from your left foot while sitting down on the driver’s seat is brake while the one on the right is accelerator. When you press the first one which is brake, it applies the brake, causing the vehicle to slow down and/or stop. You must use your right foot (with your heel on ground) to exert force on the pedal to cause the brakes to engage to hold. Below is the example of where the break is in a car.

It is important you know some other things in automatic such as letter representative. A traditional automatic gearstick has a PRNDS layout where P is for park, R for reverse, N for neutral, D for drive, and S for sport mode. Some gearstick have L1, and L2 this can represent learning or drive low setting, which keeps vehicle speed low and engine speed low. 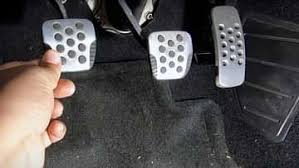 Manual has three pedals; the brake, clutch and accelerator. The three pedals are located on the floor of the car. On the floor there are three pedals, the first pedal from your left foot while sitting down on the driver’s seat is clutch while the second one is brake and the third one is accelerator which is at the right foot of the driver. For more emphasis the middle one of them is brake. When you press the second one which is the middle, it applies the brake, causing the vehicle to slow down and/or stop. You must use your right foot with your heel on ground to exert force on the pedal to cause the brakes to engage.

Autoremedy365 is ready to take you on car brake and other pedal on tutorial. In this lesson, you are not only being thought where brake is in the car but other functions of pedals in the car.

For the purpose of remembering and identification of three important pedals in a manual car, we now have a pedals representative of ABC. These controls from right to left are the Accelerator, Brake and Clutch. This can easily be remembered by ABC.

Accelerator pedals are very sensitive to touch. When moving off from a stationary position and in 1st gear, you only need to press the accelerator pedal slightly. When you press the accelerator and as the engine speed increases, the needle on the tachometer, or rev counter as it’s also know will move. The speed at which the engine operates is measured in revolutions per minute, or RPM. The tachometer displays the RPM as thousands per minute.

Your car’s braking system technology has fundamentally remained almost unchanged for decades. Metal brakes discs rotate with the wheels and brake pads which comprise of friction material are pushed against the discs to slow your car when the foot brake is pressed (see how car brakes work).

The harder you push the brake pedal, the quicker your car slows down. On some older vehicles, hitting the brake pedal too hard puts you at risk of potentially losing control due to the wheels locking up. However, since 2004, so many  vehicles are fitted by law with a system called ABS. ABS or ‘anti-lock braking system’ uses sensors to detect if a wheel becomes locked and if it does, the system releases the brakes for that wheel just enough for the wheel to begin rotating again.

Essentially, wheels that are not rotating do not steer, so the benefit of ABS is that you have far greater control of your vehicle, even when braking in an emergency situation.

The brake pedal is located in the middle, between the clutch and the accelerator. You’ll never need to brake and accelerate at the same time, so you use your right foot to brake, the same foot that you use to operate the accelerator.

To use the brakes, we use a technique called feel, firm and feather. This means that you push the brake pedal until you feel the brakes beginning to work or hold, then firm on the pressure to lose the required amount of speed and finally feather the brakes to make slight adjustments.

How do You Stop an Sutomatic car if the Brakes Fail?

How to stop a vehicle that has total brake failure. Pump the brake pedal continuously. This could build residual pressure in the brake system to slow the car, but will most certainly warn trailing traffic you are attempting to stop. If you feel brake pressure return, gradually press the brakes until you come to a stop.

What Gear Should you Start an Automatic Car in?

If you’re starting an automatic car, put the gearstick in either the “P” or “N” position. “Automatic” refers to a car’s transmission. It means that you don’t have to change gears yourself — the car does it automatically. If the car has an automatic gearbox, there will be only two pedals.

What Does Kickdown Mean in an Automatic car?

Kick-down is used when maximum acceleration is needed, such as for overtaking. When the accelerator pedal is pressed all the way to the floor beyond the position normally regarded as full acceleration, a lower gear is immediately engaged. This is known as kick-down.

Which Foot to Brake in an Automatic car?

Automatic cars are fitted with only two pedals which include the brakes and the accelerator. While driving, people tend to use their right foot to accelerate while left foot to brake. But that is wrong. The proper foot to use in braking is the right foot for safety purposes.